The news about Joan Rivers death hit me as I was huffing & puffing on the stationary bike at the gym and watching TV.

An image of her glowing face appeared on the screen, reminding me how captivating she was. Her all familiar nasal voice cracked a joke, so funny, insulting, delicious and good hearted. I wiped the sweat off my forehead and felt that it was OK to be envious of the twenty something years old that pedaled effortlessly on the other bike, while texting, without a drop of sweat on her flawless bronzed skin. As I stared at her sculptured tummy and tight thighs, I found myself remembering some of Joan’s jokes about aging like, “Better a new face coming out of an old car than an old face coming out of a new car!”

Joan once said, “Anytime people ask me where I’m from, I say, Larchmont.” She had an entire repertoire of Larchmont jokes that would make any of my neighbors crack up.

“Larchmont, a place so small, the You Are Entering Larchmont sign said that on both sides.”

And, “My father, the doctor, did his practice in Larchmont and the hospital in Larchmont was so small, it was called, Fred’s Hospital and Grill. You had your choice of bandages or frankfurters.”

As I sat in my lawn chair and smelled the roses that I planted in my garden in Larchmont ,I remembered Joan Rivers. 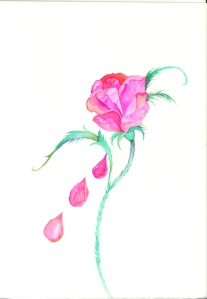